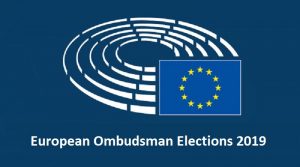 In a series of hearings, MEPs quizzed the five candidates on what they could bring to the post of EU Ombudsman by way of impartiality, visibility, transparency and ethics, if elected.

In a hearing on Tuesday, organised by the Petitions Committee (PETI), the five nominees presented their key priorities and visions to help bring EU institutions and the office of the Ombudsman closer to European citizens.

You can watch a video recording of each one-hour hearing on the special website for the election of the next European Ombudsman (links below).

The introductory statements of all candidates have been published on the website (soon available in 24 EU languages).

Parliament will elect one of the candidates by secret ballot during plenary session on 17 December.

The names of the five admissible candidates were announced during the October plenary session in Strasbourg.

The European Ombudsman conducts inquiries into cases of maladministration by EU institutions, bodies, offices and agencies, acting on his or her own initiative or on the basis of complaints from EU citizens.

The Ombudsman is elected by the Parliament at the start of each parliamentary term. The current European Ombudsman, Emily O’Reilly, was elected in July 2013 and was re-elected in December 2014 for a five-year term.